The biggest task for me was to cross Punjab. Punjab & I go back long in memories; not very pleasant but driving a MH tag car on PB area just calls for attention and fines to pay. They always have a reason; car is modified, to dark tints on the car (and mind you none on my car) , speeding, I just don’t like your face 😀

This time I was very clear; Rohit will drive his car ahead and I will follow him like a good boy. I got pulled over 5 times and then I had to literally cry to the cops; I told him to keep the car and let us go if they think I was so bad a driver, I don’t deserve to be driving at all. This is what I go in return. 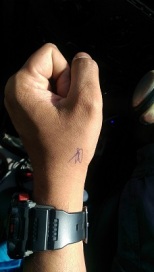 A permit to commit a murder and still walk freely (a signature on my wrist). Rohit had already lost hopes that we would make it to Manali this day; may not even get thru Panchkula by the end of the remaining day, we believed.

But I must say. The cops were very ethical; next time I got pulled over I showed him the signature on my hand and I was let go… I only wished I never washed this hand and had a permit to drive free in Panjab lifelong. Well back to reality

Reached Dharampur and noticed that “Gyani da dhabba” does not exist anymore. I guess it lost a temporary battle to the road widening project.

Until now I was just short on cash; now I was hungry too. where was the good food?Found a small dhaba on the way to Sabathu, Himachal Pradesh. Gave us excellent 3 course meal and the pickle was the delicacy, I must say 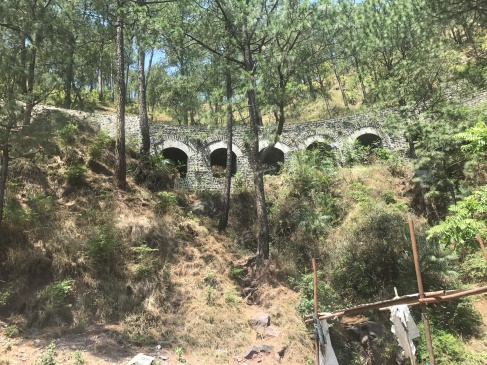 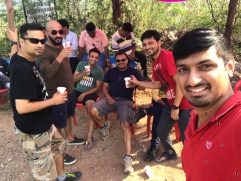 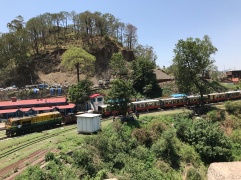 It was late and we had to leave early; found ourselves a home-stay where we had the most amazing Potato Sabji. Sometimes how just simple food just taste so amazing; I think it’s the mountains that make the difference

This year onward the permits to cross Rohtang were available online. Given the confidence we had on our system we also asked Gokul to help us with the permits. Gokul is a good friend who stays in Manali and also runs an excursion academy. He has been helping me with permits and stay etc in and around Ladakh for few years now

While Gokul did his bit we also applied for the permits online. Murphy’s Law always prevails; we got ourselves a permit for one car  and Gokul got the permit for another. But since he could not get the other permit for the other car, he reversed the number and got us a fake permit. We landed up paying a bomb for the permits made by Gokul while online we had to just pay 50 bucks. Lol

Left Jagatsukh around 4 in the morning and it still took us 3 hours and more to get to Gulaba check post. This is one place where people exploit your loss-of-patience and a 20ml Tea starts costing 30 bucks. A pack of Maggie becomes unaffordable and getting yourself a double egg omelet becomes a food for the rich and famous. We still were hungry so we had the tea and the Maggie and the omelet too. And waited for the check post to start sending cars on the other side.

Finally we were at Gulaba. While the world waited to go to Rohtang La, we were allowed to break line and move ahead because we were going beyond. The hope is always that we are the first few to go up Rohtang but we were not even close. By the time we reached up to Rohtang Top it was already dirtily littered and the humans had made a mess of the place. Few years back this place used to be clean and white.

Columbus discovered America in 1492, I am not sure if he did the right thing; but when Indians discovered a land like Ladakh few years back, I am sure it was a mistake. I can say for sure, the place has lost its charm, peace and beauty. IT IS the Sad Truth

We were excited; now finally offroading in the Himalayas was truly an amazing experience until we reached Khoksar. We checked in had some good lunch (momo and Lamb curry) and off we were for Jispa. Just in few 100 meters of the drive and we came across freshly laid tar that took us all the way to Jispa. Amazing drive. made it much before the time than we expected to reach. Thanks to the better roads, but lost the fun of driving on “no roads” 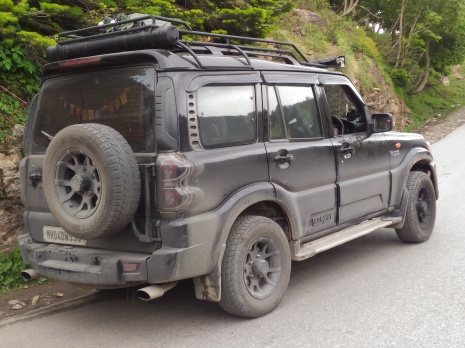 On the way up to Golaba 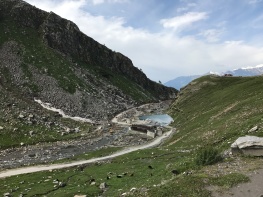 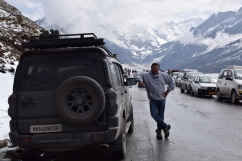 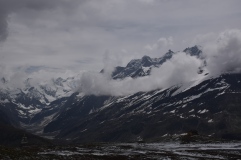 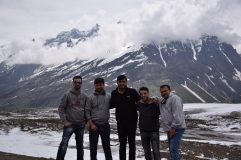 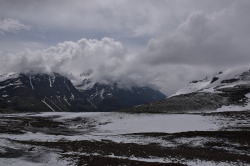 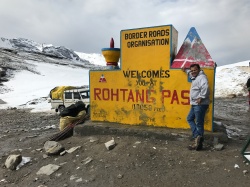 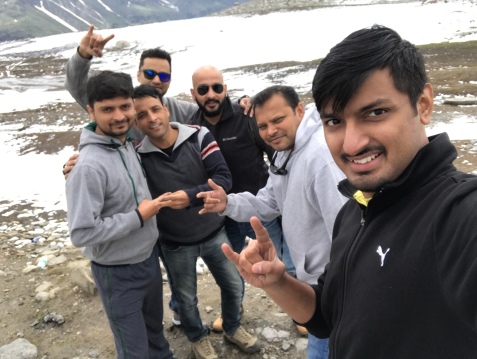 All of us :toR – Kapil, Saten, Milind, Rohit, Myself & Afshan 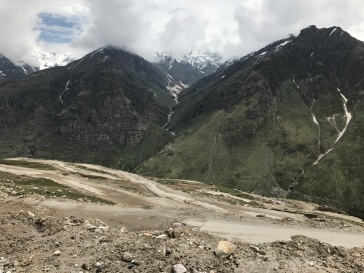 Roads down from Rohtang 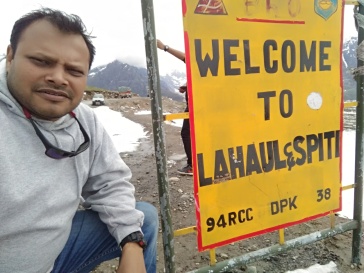 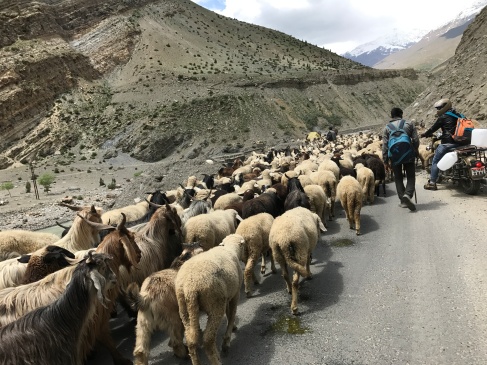 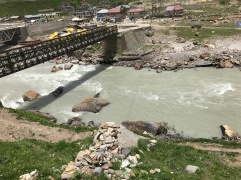 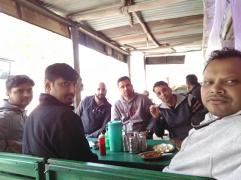 Lunch with Momos and Lamb 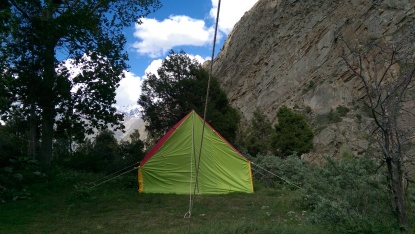 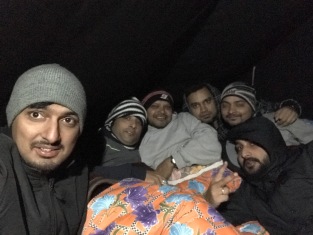 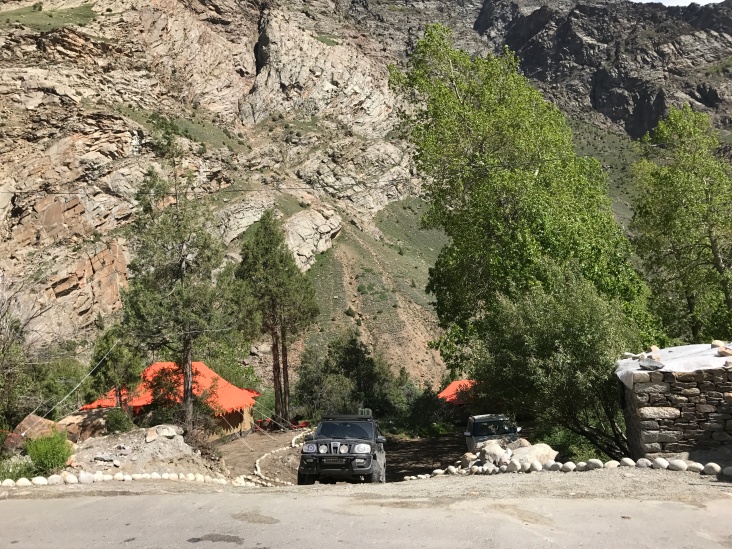 End of the Journey

The previous night at Jispa was spent in a camp in tents and dinner around the bonfire. The weather was going from bad to worst. Few bikers joined us at the camp a little late in the evening. These guys were from Gujarat; rode all the way up fro Ahmadabad to Srinagar to Leh and where returning from Manali. A lady 53 years old, riding solo, hurt on the ankle, real bad that she barely could walk, caught my attention. When I offered to help with medication and support her walk; She said …

I was sure she would make it home on her own. I wished her good luck and carried on with the evening. While I was talking to the elderly lady and enjoying her experience ; sharing some of mine too; few of the guys had already connected with the ones lesser than our age. There was now a true meaning and a huge motivation to this trip suddenly. Everyone wanted to reach Leh, at the same time no one wanted the night to end. This could have been the longest dinner we would have ever had in the entire trip 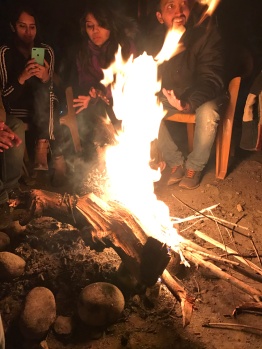 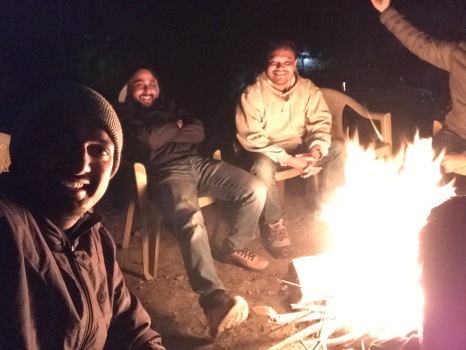 Plans were made again to leave by 5 in the morning. we wanted to reach Baralacha La just at the time of sunrise to see the first ray of light on the snow mountains. My hopes of this dream coming true had already started to fade; we now had two ladies with us and then had 2 male guests, who i did not think were least bit interested in the nature around us. We were set to leave. It was 0445 hours some one had to knock the other tent… me being the old man out of the group was given the task (just in case something goes wrong they would spare me given that I am old).

“Me from the other group, Uh, with the two cars uh”

To my surprise two ladies stepped out, showered, combed and all decked up in lipstick and face pack. I wasn’t staring at them because they looked pretty; but because of the courage they showed this morning. I barely brushed my teeth; these girls were all showered. The water in the camp was freezing cold straight from the river running besides us; no heater and no electricity. We guys did not wash our face properly, these girls had showered multiple times. Why? because they wanted to look pretty in Leh.

They asked for 15 mins; the guys has not woken up and neither was their driver awake. Disappointing the guys in our group finally Rohit and I decided to leave. 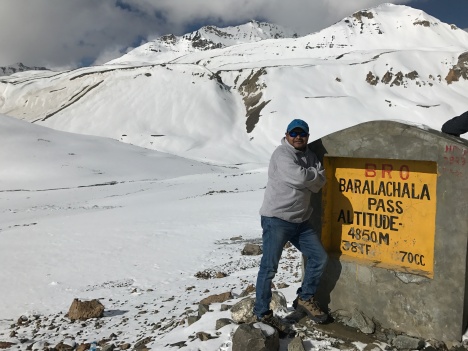 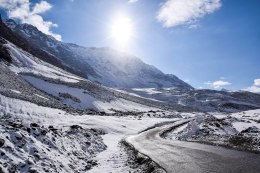 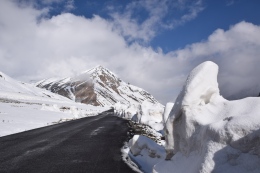 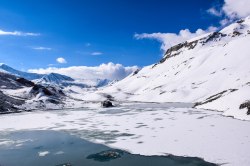 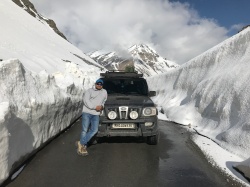 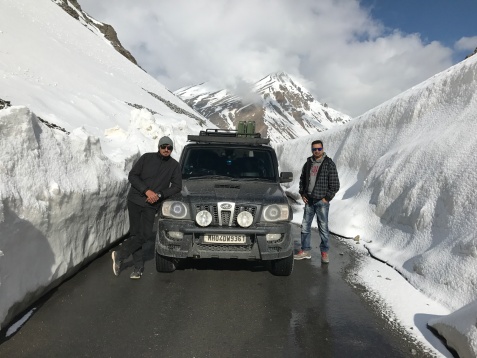 Leaving behind an impression – Saten and Kapil

After enjoying the snow we set pace towards Pang. As I remembered Pang was far and then Leh was even further, even further than were Fiona stayed and so the donkey kept asking “Are we there yet” again and again. from Sarchu to Leh was also a very difficult drive as I remembered from my previous trips. Rohit kept telling me that he did Leh to Manali in 13 hours last year. I wasn’t convinced..

After a quick break at Sarchu we were headed for Gata Loops. at Sarchu we met the ladies again; by this time one of the Ladies was hit bad by AMS and so was Afshan. By hook or crook, we had to get Afshan across to Leh, he had sacrificed this Ramzan for this trip; now if he did not make it thru it would not have been worth the sacrifice. I quickly prepared two bottles of ORS and gave it to both the Kids asked them to gulp it down in less than 15 min. we all had breakfast together and by the end of it all was well. I got typed casted as “Doctor Uncle”

Milind started counting the Gata Loops as we crossed them. there are 22 loops in all; but I guess he wasn’t convinced if they really are 22. Every loop we crossed by there was a count, until we reached the 17th loop; then there was a “Thud“.

I stepped out to check what that was; to find my right wheel had slipped out of the fore arm it is usually hooked on to. We were in the middle of no where and the car broke down 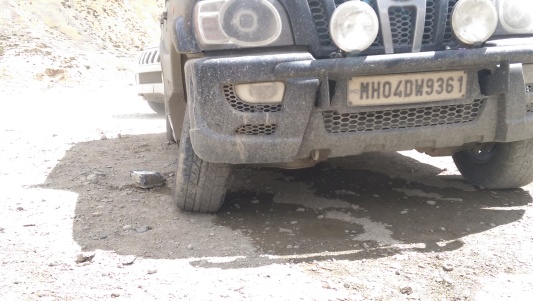 We were in the middle of nowhere with no help, with the broken wheel we had no choice but to drag the car at least till Pang. Slow and steady we left. Like I said this road was anyways long; this accident even made it longer still had to cover over 65 Kms and two high altitude passes. We passed the 18th Loop; counting had stopped; and the roads went from bad to worst. This is one time I wanted to see a freshly laid tar that my poor hurt car could drive on not causing it more pain; but no!!  I have no recollection of the drive from this point to Pang. All I remember is we reached Pang around some time after mid day; don’t even know how long we took to get here

My Trip ended here. So much for Siachen to become a reality.

One thought on “A Destroyed Hope”